END_OF_DOCUMENT_TOKEN_TO_BE_REPLACED

Do Your Job But Live Your Dream

Do Your Job But Live Your Dream

It used to be that a young person graduated high school or college, tossed aside the whims of childhood dreams, and set out to build an adult career that would be self-actualizing while also supporting them and a family. Entry-level white collar jobs were plentiful, and even a mechanic or machinist could enjoy a skilled trade they love and the protections of a union job. But for many people trapped in today’s service and gig economy, the dream of a fulfilling professional career has gone the way of the dodo bird.

Don’t get me wrong; there’s nothing wrong with driving for Lyft, waiting tables, or working another service job to pay the bills. It’s all honorable work. But it’s not self-actualizing. It’s not who you are.

That’s why I think every person needs a passion or dream and should be encouraged to pursue that passion as long as they can. I got lucky and turned my dream of being a comedy writer into an actual career. But you don’t have to make money at your dream to live it. Golfers don’t get paid to hit the links once or twice a week. Nor do amateur bowlers, tennis players, painters, photographers, bloggers, and on and on. With the advent of YouTube and podcasting, even wannabe video stars and political pundits (like me) can do their thing. I am constantly amazed and impressed by the vast amount of talent out there in the world. And thanks to technology, you don’t have to win a network role or an Emmy to be a star.

Yet I’m constantly surprised and saddened by my Facebook friends who are missing this important component of a happy life. Every life will inevitably suffer the ups and downs of financial stress, illness, loss, and mental health struggles. Without the important nutrients gained from a balanced diet of joy and fun, the bad calories of daily life will ultimately rot the soul.

Actress Ann Dowd (“The Handmaid’s Tale”) told her story of how she came to live her dream recently, and it made me think we need more stories like hers out there for people who are trying to find fulfillment in their humble lives. If you’re just living to make the rent or raise the kids, you are only living half a life.

So with that in mind, here’s my story of how I came to live a dream. Not everyone will be as lucky as me. But hopefully my story will motivate others to at least take their shot.

I went to college without any inkling of what I wanted to be when I grew up. The only thing I loved doing was playing hockey, and I knew that short, skinny kids with moderate skating skills don’t make the NHL. But I did like comedy. I liked watching it on TV, listening to comedy albums, and, once my brother Bobby began doing standup comedy in New York, hanging out with him and helping write his act. Night after night during my breaks between semesters, I would trek with Bobby from comedy club to comedy club, watching him and the likes of Ed Bluestone, Alan Zweibel, Bob Shaw, Barry Diamond, and dozens of other standup comedy black belts whose names aren’t familiar to most readers. While I pursued a degree in business administration, I was earning an virtual masters degree in comedy just by osmosis. Soon I began applying those skills on my college radio station, where I cohosted and cowrote a National Lampoon Radio Hour-style show.

But it was just a hobby. I wasn’t pursuing a career or money. I was having fun. Like playing hockey.

As my senior year of college was coming to a close, I was wondering where I would fit in in the adult world. I thought I might have the skills to write copy at an ad agency. But it wasn’t what I wanted to be when I grew up. Which, if based on the metric of graduating college, was only weeks away.

One night about a month before finals, I attended a campus seminar about finding your first job. Seems like the practical thing for a business student to do, right? The frivolous days of college radio were ending, I was going to need a job, and it was time to grow up and get serious about life.

The speaker, a best-selling author on the topic of career development, started by telling everyone to take out a piece of paper and write down the three things they’d be in life if they could be anything in the world. My list, predictably, was:

The speaker then instructed everyone to “cross out numbers two and three, look at number one, and focus for the next two hours on how you can become that.”

That’s when I did the singularly smartest thing I have ever done: I crossed out my number one: hockey player. Because I knew that nothing he said about résumés and job interviews was getting me in the NHL.

So I looked at #2 and spent the next two hours asking myself, Why are you looking for a job in advertising when you really want to be a comedy writer?

After the seminar, I returned to my dorm room and set out to convince my roommate, Mark, a theater major and my cohost on our little college radio comedy show, to cowrite a TV spec script with me. I honestly do not recall how I knew what a spec script was.

Mark, who was waist deep in writing his Theater major final thesis project, two one-act plays, thought the idea was absurd. “Are you nuts? We have finals in a month!” I rebutted his forceful protest with the best counter-offer I could come up with: “What if I do all the typing?”

Mark reluctantly agreed, and I spent the next month typing out the “Barney Miller” script we’d rift on during study breaks. (For those under 50, “Barney Miller” was the “Brooklyn Nine Nine” of my time.) I sent it to my brother and to a cousin who was also in the TV business. My cousin and my brother’s agent both got back to me with vague words along the lines of “it shows promise.” That was all I needed to hear.

Two months later, I arrived in Los Angeles with an old manual typewriter, $2,200 in college loan debt (the equivalent of about $10K today), and two more spec scripts that I wrote in motels at night during my drive across country. (I was always a fast writer.) Aside from a six month day job as a bank teller to earn rent money (where I spent my lunch hours writing jokes in the breakroom), I never stopped pursuing the dream. I kept writing spec scripts, started doing standup to showcase my material, sold jokes to whoever would buy them, and kept networking to make things happen. Suffice to say, with a lot of hard work, tenacity and resilience, I eventually broke through and enjoyed a fairly successful career as a TV writer (including writing for “Saturday Night Live” – another dream fulfilled).

All thanks to that speaker in college who advised me to become a hockey player.

Granted, I had a lot of built-in advantages not available to everyone; I had a brother in the business to help me navigate the terrain, and a bit of born-with talent I was able to match to my passion. But getting paid to do it was still a long-shot dream that required the one thing we are all born with: a driving desire to like how I spend my time.

To button my point, I didn’t need to get paid to live out my dream. I stopped getting paid to write long ago, but I still do it to this day. In fact, I’m doing it right now. And though no one will pay me a dime for this longwinded and self-indulgent essay, I enjoyed the two hours I spent writing it as much as writing a sketch for “Saturday Night Live.” This was my day on the golf course. I hope I broke 80. 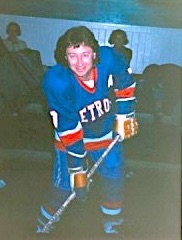 I also pursued other dreams in my life as well to keep me sane when work wasn’t enough, including earning a black belt (achieved), hosting a political talk show (achieved on a small scale), and being a great dad (a work in progress). I even continued playing ice hockey into my mid-thirties and got to an adult league championship game (which we lost). Some dreams never die.

What do you love to do? Find it and do it. Even if it’s a few hours at night or on the weekend. Write. Paint. Compose. Play. Cook. Dance. Travel. Shoot an average round of golf or a game of pickup hoops. Buy the motorcycle. Build the boat. Whatever it is, add a little dash of it to your life. You don’t have to become a pro or even be good at it. You just need to love doing it.

And never listen to someone who tells you your dreams are impossible. Had I gotten that same sage advice a few decades back, I might be in the Hockey Hall of Fame today.

Kevin Kelton is the cohost of The More Perfect Union podcast and founder of the Facebook political group, Open Fire.